Skip to content
On the plane to Cameroon this weekend, I read a book called Visions of Vocation by Steven Garber. It is one of about twenty books that I have stacked on my desk, mostly gifts from my thoughtful husband who picks up any and every book he can find for me on the subject matter. As I read so many books like this, I honestly didn’t expect many more new things to be revealed.  But I was pleasantly surprised. 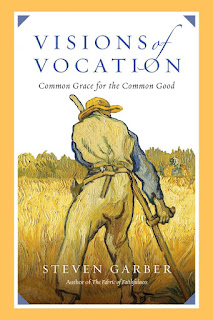 He asks this key question throughout the book:  Knowing what I know, what will I do?

He takes a close at Adolph Eichmann, a Nazi official, who maintained that all he was doing was his job, following the rules, obeying commands.  He didn’t kill a single Jew, nor did he give orders for Jews to be killed.  He asked, “How can that be wrong?  I simply did my duty.”  Yet it was concluded that he saw enough to be fully informed and therefore he was morally responsible.

He contrasts that story with the founder of International Justice Missions, Gary Haugen, who was working for the US government with the Department of Justice when he was sent to Rwanda following the genocide in 1994.  What he saw upset him to the point that he had to take action and IJM was born.  It now advocates for justice and addresses many legal issues in many countries in the world.  He could have helped Rwanda and left that country, feeling satisfied, and continuing to work for the Department of Justice.  But instead, he left a good-paying job to start IJM where he would have to raise a lot of money, and where his life and the lives of the lawyers that work for IJM are threatened and (some have been) taken.

Knowing what I know, what will I do?

It is the most difficult dilemma facing every human being to figure out what you will do with what you know.  In large part, it is what makes us human.

The Good Samaritan is an example of this need to love our neighbor by paying attention to the details that matter the most.  But Garber suggests paraphrasing from Walker Percy, “The Man who got all A’s and still flunked life” for a new title of the Good Samaritan parable.  The lawyer who was asking the question was obeying the law but not morally serious about the question.  Justice is about following the letter of the law whereas righteousness is about doing what is right regardless of the law.  You can get all A’s and completely miss the point.

Good societies anywhere require people with a similar sense of calling, folk who see into the messes and horrors and complexities of human history and decide to enter in for justice’s sake, for mercy’s sake.

I see things that you don’t see.  I see messes and horrors and complexities.  There are people beaten down on the path I take and I have to decide when to enter in for justice’s sake, for mercy’s sake.

You see things that I don’t see.  You see messes and horrors and complexities.  There are people beaten down on the path you take and you have to decide when to enter in for justice’s sake, for mercy’s sake.

I don’t know how you respond to what you see.  I don’t know how you struggle to “do with what you know.”  I know how I struggle.  Yet I believe that there is much more going on than what we hear about in the news.  I get glimpses of it daily from fellow brothers and sisters in Christ, glimpses that are beautiful and encouraging.  Heroes who are loving their neighbors by paying attention to the details that matter most.

But I believe there could be even more going on if each person was encouraged and equipped to be a change agent in their specific circumstances.  How many of us say “I can’t” or “I don’t know how to start” or “Someone else can do it better” or “I’m just…”.  How many of us are indifferent, living in a climate of “whatever” and “to each his own” or “I don’t have time.”

Each of us has a piece of knowledge of this world that is different from another.  Our unique personalities and upbringings and cultures all play into that.  And as Christians, we all have been made in the image of God, given gifts and talents, and have the same Holy Spirit.

This question is good enough by itself and I want to stop here.  But there is more that we need to consider with this question and that will be a future blog.

May you have good and deep considerations this day on this question:  Knowing what I know, what will I do?