It ain’t what you don’t know that gets you into trouble.

It is what you know for sure that just ain’t so (Mark Twain).

DML is about a message and a method. The method is training built on a solid Biblical foundation of God’s message.   As we travel and teach, we find recurring “truths” in many churches that “just ain’t so.” Here are a few of our favorite: the church is a place to go, not a people equipped to go, some things are sacred (Sunday?), and some things are secular (business?), pastors and missionaries are called into full-time ministry others are not. We miss an opportunity when we live life influenced by “what ain’t so.” But truth “sets us free” to express the creativity of God in all areas of life. DML challenges the “ain’t so” with the Bible’s “is so.” And lives are unleashed to create! 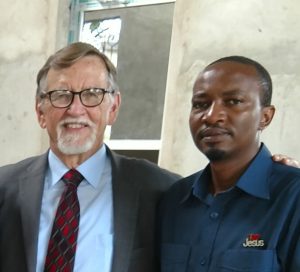 Pastor Anthony (pictured here with me after a workshop in Dar Es Salaam, Tanzania) struggled to lead his young congregation. Unemployment was high, motivation low with many of the educated waiting for government jobs to employ them. It was during a low point in his struggling church that Pastor Anthony attended the DML two-day pastor’s workshop. It was water to a thirsty soul. He learned that “business” is not evil, pastors are to equip the people, every Christian is a priest and ambassador, you cannot go to church when you are the Church, and the greatest resource available to attack the hardest challenges were sitting every Sunday in the church pews.

He bought the DML books, read them, reviewed his workshop notes, and began making changes to how and what he taught. He gathered the young leaders and began teaching them that business and work did “as unto the Lord” is an act of worship and a calling. He explained that being made in the image of God meant every believer had the creativity of God waiting to be unleashed. They came to the conclusion that they did not need to wait for God, as God was waiting for them. They needed to create jobs by God’s grace! In one of their first brainstorming sessions, they came up with over 100 potential businesses they could start with a lot of sweat and a little money. Within a few months, they launched a business that supported them and is helping provide funds to care for their extended families. God unleashed them from being members of a building to be ministers in the marketplace. Rather than seeing Christianity as members in the pews, they came to understand themselves as ministers in the market. Their growing business was providing them with income plus a platform for being ambassadors of the Kingdom of God. Pastor Anthony realized discipleship is about real life, real challenges, and real opportunities.

The story is still unfolding. But one unintended consequence was that Pastor Anthony, struggling himself financially, decided he needed to be a part of the solution and started his own business. With the equivalent of $7 in his pocket and a vision of the possible, he launched a digital company that is now providing jobs for other young people in his church to work and grow.

When the “ain’t so” is removed to see the truth, the potential is realized as creativity is released. DML is now taking the message to thousands of churches across Africa (see other reports). While the method is essential (the how), the message it foundational (the why). Join us in unleashing the church from the four walls of the building to being the Church in the four corners of the marketplace.

Dr. Phil Walker, Chairman of the Board, DML