When we landed in Cameroon, on May 16, we learned that one of our colleagues had been kidnapped recently and had been released the day before.  This past Monday we had a chance to sit down with her and hear her story.  I was given permission to share it, but because of continued insecurity, I will not share her name or any other relevant details that can be traced. 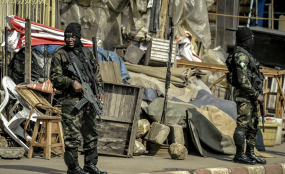 As I wrote in an earlier blog, the businesses in the Northwest part of Cameroon have been forced to close their businesses every Monday as a sign of protest.  Those days are now called “Ghost town” days as it has escalated with the fighting in the last six months – those days are sometimes extended to three days if there is an additional need of protest.  The military is trying to squash the rebellion, and so anyone seen out on Ghost town days is in danger of being killed.

It was one of these Ghost town days when Esther heard a knock at her door at six am.  She was alone in the house with her fourteen-year-old daughter and she immediately knew that this would not be good news.  She peeked out the window and saw the young men out there with their guns.  She asked what they wanted and they told her to come out of the house.  She came out and they immediately demanded her phone and informed her that she needed to come with them.  She tried to protest but they insisted.  She was allowed to get dressed, and she informed her daughter to call her father (her husband) who was working in a different city.  She told her that everything would be fine and left with the young men.  Esther had just been released from the hospital a couple of days before and was still weak from her illness, but she was told that they would have to hike into the bush to reach the motorcycles that would carry them to their military base.  They hiked and hiked.  At one point she was crawling because she was so weak.  And it was dangerous.  They had to hide several times because it was a Ghost town day and the military would act if they were seen. 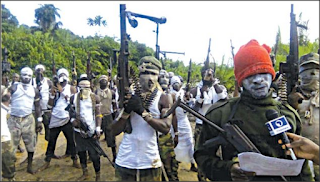 They finally made it to the motorcycles and Esther was blindfolded so that she could not see where they were going.  When they finally arrived, she was taken to the “women’s cell” where she was alone.  She heard men in the men’s cell, who were being taken out into the yard and tortured.

When they finally came to her, they told her that she had to pay two million CFA (about $4000) in order to secure her safe release as they wanted to buy another of the large guns that they had (they showed her which gun they wanted).  After a long series of negotiations, they settled on 500,000 CFA ($1000) and let her go with the promise that she would pay by Friday.

They blindfolded her again, drove her out a ways and then released her.  She had no idea where she was.  She was weak, it was dangerous to be out alone, and she had no idea where to go.  She started walking and finally saw a house with a woman, who waved at her to get down.  Military trucks rolled by several moments later.  She was able to get to the house where she hid for a couple of hours before heading out again.

When she finally made it home, she found the house full of people who were very sure that they would never see her again.  They were very relieved to see her. 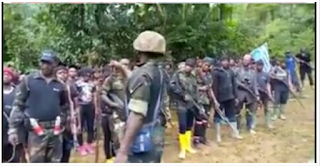 Two days later, her husband went to pay 100,000 CFA to the kidnappers in an attempt to negotiate again.  They took the money but kidnapped him.  They held him until Esther paid the 500,000 CFA.

Thankfully, he too was released unharmed.  For many, the story does not end as well.

I have heard story after story that is similar to this, and worse.  This is how the resistance is funding their part of the war.  They are kidnapping their own people and holding them for ransom.  On the other hand, we hear that the military is committing atrocities to try to squash this, and blaming the resistance for some of these.  People in this area are being killed on both sides.

I spoke at a workshop on Friday in Yaounde (the capital city and outside of this area of conflict) and my co-presenter was from this area.  When we finished at the end of the day, he looked at me and said, “Well, back to the war-zone.”

What do we say to this?  How do we even pray?  We believe that there is a legitimate complaint of injustice toward the 20% Anglophones and there has been no movement toward reconciliation.  To their credit, the resistance has tried to resolve this peacefully through protests for a couple of years now.  But the last year has seen an escalation, and it is being met with escalation.

While we can’t solve the conflict, what we would like to do as Discipling Marketplace Leaders, is to establish a benevolence fund that can be used to stand with our ministry partners in the countries where we are working.  We can’t protect Esther or her family, nor can we erase the trauma, but we can stand with her as the body of Christ through prayer and offsetting the financial hit she took from this ransom payment.

If you would like to contribute to this fund, please go to www.disciplingmarketplaceleaders.org/donate, and select DML from the dropdown box.  In the comment section, write “benevolence.”

Thank you for helping DML make a difference!