“I want to tell you how this has changed me.  You need to hear the details.”  She said this to me with an urgency, while sitting on the edge of her chair.  “The message that my work can be worship has been startling and invigorating at the same time.  I have taken it to my staff and they too are changing.  We had never even thought about the environmental bottom line before and now all of us are involved in caring for the environment.  But more than that, I want to teach churches about how to do better with their administration and finance.  They measure eve 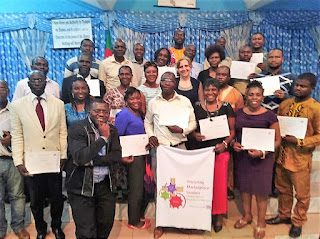 rything by the Great Commission, but do they not think that they will be held accountable for how they handled the money of the church?  They have not been trained in this and there is no accountability or responsible planning.  Can I use your materials to help train churches in my city?”

She went on for about forty-five minutes with her ideas and her excitement.  She had been has been involved with Discipling Marketplace Leaders since July of last year but her understanding and her commitment to the message is deepening.

She asked, “Are you okay with DML being used in this way?”  I answered, “This is not material that belongs to DML.  This is a Biblical truth from Genesis 1 and 2.  We don’t own this.  This is for all of us, from our Heavenly Father to all of His children.  You should use this in the way that you feel called.”

She is the owner of a microfinance bank in Cameroon, with four branches in large cities.  She told me the story of the almost $50,000 she had to pay to be registered with the central bank, having to submit and resubmit documents ov 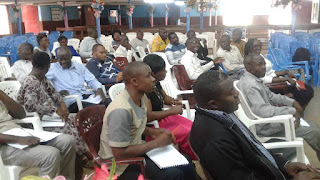 er and over for whatever reason they could find to reject her applications, until she finally had to hire someone to do it for her.  She has no receipts for the $50,000 that she has paid.  But she can now do the work that she believes God has given her, to be salt and light to a people who are hurting and struggling in a difficult environment.

Her home is in a city that has been closed due to a strike and she cannot return home until February 15.  All businesses have been forced to be closed for these two weeks.  She told me about the army trucks heading into her hometown while she and many others left prior to the strike starting.  News of shootings and killings trickled back to her each day while we were in trainings last week.  The stress of what is happening is just under the surface of the passion she feels in wanting to move forward with her calling.  Friday morning, news came to us that there were many arrests of Anglophones in Yaounde (where we were) as the trial of one of the separatists was getting under way at the courthouse.  Tension rose in the group, but especially with her.  She wants peace but also resolution.

The tension of the “now, but not yet.”  We see the potential to live out an aspect of the Lord’s prayer, “Thy will be done on earth as it is in heaven,” but we have to continue to deal with the fallen will of people around us.  We get excited to do our work as an act of worship, and then we are frustrated by those who prevent us from even going to work. 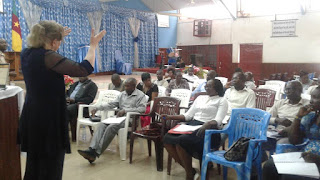 Romans 8:21-23  …With eager hope, the creation looks forward to the day when it will join God’s children in glorious freedom from death and decay. For we know that all creation has been groaning as in the pains of childbirth right up to the present time. And we believers also groan, even though we have the Holy Spirit within us as a foretaste of future glory, for we long for our bodies to be released from sin and suffering.

Here is a video that was put out last week about the struggle in Cameroon with the separatists.  It is a good video to watch to give an understanding of the challenges and how we can pray.  Thank you for reading and for praying.  We appreciate your support!