This past week, I had the privilege to be the speaker for the Bible Study at the Victory Baptist Church in Kaduna, Nigeria.

I have to admit that it was a bit of a struggle for me to get enthusiastic about it.  You see, I had to teach Integrity and Finance with ECWA Seminary that morning from 9-12:30 pm.  Then I had to rush to another Baptist Church where we were doing a two-day workshop for pastors and church leaders from the area Baptist Churches (about 50 pastors and church leaders were in attendance).  I taught there from 1 pm – 4 pm.  I then was scheduled to teach at this particular church from 5:30-8 pm.  There was no time for lunch or dinner (other than some quick ramen noodles which I always keep in my suitcase for times such as this).  Normally, this isn’t a problem for me to teach this much.  But the last two and a half weeks had been so exhausting (especially for me as an introvert) and weariness was settling in deep.

I tried to persuade the person arranging this to let me just speak for thirty minutes and then let me go.  But I could tell that they weren’t going to budge.  So at some point, I resigned myself to the fact that I would be there for the full evening.

And, as God often has it, it turned out to be a blessing.

The church was in an unfinished building with a dirt floor, with more than 120 people waiting for Bible study to start at 5:30 pm on a Tuesday evening.  Let me emphasize this:  120 people, ready (and on time) for Bible study at 5:30 pm, on a Tuesday evening.  This is unusual.  And this is the average turnout, I was told, for their weekly Bible study.  Most of those in the audience were considered youth (which in most parts of Africa, means under the age of 35).  I spoke on 1 Thessalonians 4:11-12 and talked about how work is an opportunity to worship and how we can witness through our work by working with excellence, being committed to our values, and remembering that we work for the Lord and not for man. 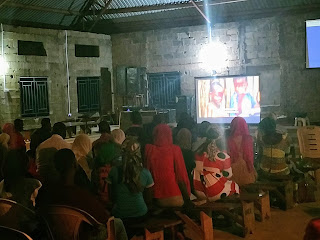 I then showed them the first session of the Poverty Cure, by the Acton Institute.  If you have not watched it, I would highly recommend it.  I love watching Session one and two with Africans because you can see the lightbulbs going on.  The first session is called “Charity that Hurts” and it begins to expose the audience to the idea that aid can be problematic, that looking for solutions from the outside is problematic, and that most answers can be found within ourselves (with the help of God) and our community.  I then broke them up into small groups for discussion.  The noise was astounding as people talked and argued and debated about these concepts.  The feedback was great, as it always is when we show it, with people responding by saying that they need to stop waiting for the answer, and instead, be the answer.

But the highlight of the night was that as the adults broke up into about ten groups to discuss what they watched, there was a small group of children, pictured here, who also came together as a small group and they too were discussing what they saw.  When it came time for the leader from each group to share what had been discussed, a nine-year-old girl in the back row, dressed in blue, stood up as the leader for the children’s group.  She said something like this, “We also discussed what we watched in the video.  And we have seen that it is good for us to work with our hands.  There are things that we are able to do that we are not doing.  We need to not be fully dependent on our parents but also work.”

Praise the Lord!  May a new generation arise that doesn’t look outside for answers but knows that as co-creators with God, as image-bearers and reflectors of the Most High God, that they have the capacity and ability to find answers for themselves.

I leave for home today after a very full time in West Africa.  I’m looking forward to some family time this week over Thanksgiving.  I am so thankful to God for His faithfulness, His grace, and His mercy, and I thank God for each of you as well who have encouraged, prayed for, and supported this ministry!