Ethiopia is considered to have one of the fastest growing economies in the world, for GDP per capita growth from 2000-2016 (IMF).  It has been lauded in many arenas because of this and it is believed that their GDP will continue to show great growth for the next five years at least.  Additionally, while much of Sub-Saharan Africa found the number of people in extreme poverty going up in the last fifteen years, Ethiopia decreased from 29 million to 20 million.  However, with a per capita annual income of $660 (per person) it is hard to celebrate with abandon.  That works out to be $1.85 per day, which is right around extreme poverty.

What is also confusing to me is the World Bank’s report on the “Ease of Doing Business” as it relates to the last three years in Ethiopia.  In 2016, Ethiopia ranked at 146 out of 190 countries for the ease of doing business; in 2017, Ethiopia ranked at 159; and this year, 2018, they ranked at 161/190 countries.  This seems to be the opposite direction for a country that is seeing good growth in the GDP.

This report breaks down this number into a number of different categories, and for the ease of starting a business, Ethiopia ranks at 174/190 countries (because of a high cost, high number of procedures, and a lengthy process) and 173/190 for the ease of getting credit.  The lack of ability to get credit is alarming as most businesses need multiple injections of capital in order to grow their business.  When I ask what the interest rates are in the banks and microfinance institutions, I hear 15%-20%, which is pretty typical across sub-Saharan Africa.

But as you get to know people and people begin to trust you, you learn the real story.  Let me share one with you (with permission from the business owner, whose name I will change). Eyob is a carpenter and metal fabricator.  He won the award from the government last year for entrepreneurship which is a huge honor!  As a result of this award, the government gave him $14,000 worth of equipment, which he needs to repay over the course of five years at 0% interest, as well as a workshop that he can use for free. This is great!  Unfortunately, the two machines he has been given have yet to be used.  The reason is this:  in order to get the contracts that will give him a large amount of work, Eyob needs to have enough stock to run the machines efficiently and meet the demand.  He needs a loan of about $3000 to do this.  He went to several banks and microfinance institutions and was approved for a loan in this amount at 15% interest per annum.  But then, on the side, he was told (in each situation) that he would need to give 20% of the loan to people processing it as a bribe.  That essentially brings the interest up to 35%, something that Eyob knows he cannot afford.  Add to that the fact that most churches tell their members that they need to tithe off their loans, and suddenly he is looking at 45%.

So he continues to w 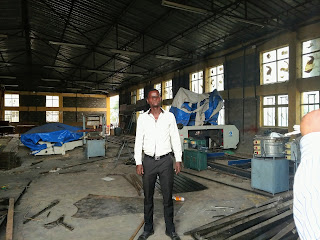 ork from home, doing the work by hand, but saddened by this gift that he has been given which is sitting idle. (Pictures of Eyob with machines that are covered and have never been used.)

This is a significant challenge and one that I am learning is not unique.  And unfortunately, these bribe demands are being done by non-Christian and Christians alike.

DML in Ethiopia is working on a way to address this but it will take time.

Another challenge is that of personal vehicles.  Ethiopia is a country of approximately 110 million people but only 500,000 cars in the country.  This means that 0.5% of people have cars.  The reason?  The government imposes a 230% tax for all cars that are imported in an effort to reduce the number of cars and protect the roads.  That means that a used car that is imported from Dubai at a value of $10,000, will now cost $23,000.  I’m told that cars in Ethiopia actually appreciate (rather than depreciate) because of these challenges.  My host told me that he purchased his 2004 Toyota two years ago for $10,500.  Today, he believes he could sell the car for $13,000 US.  Bizarre.

We continue to pray for breakthroughs for the citizens of Ethiopia, as well as other countries who face similar challenges.  The desire to work is there.  The ability to be creative and grow businesses is also there.  What we need is opportunities and a more level playing field to marshall that will and ability in a productive way.